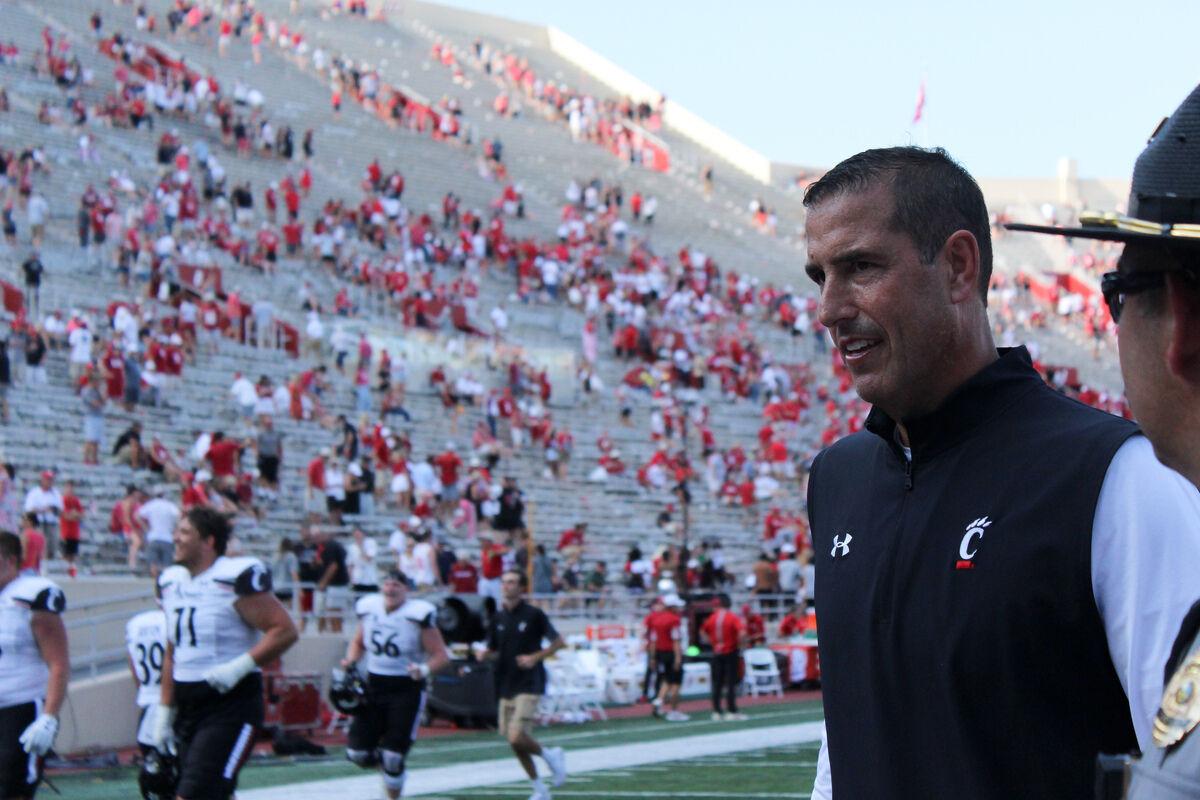 University of Cincinnati football head coach Luke Fickell at the Cincinnati vs. Indiana game on Sept. 18, 2021. 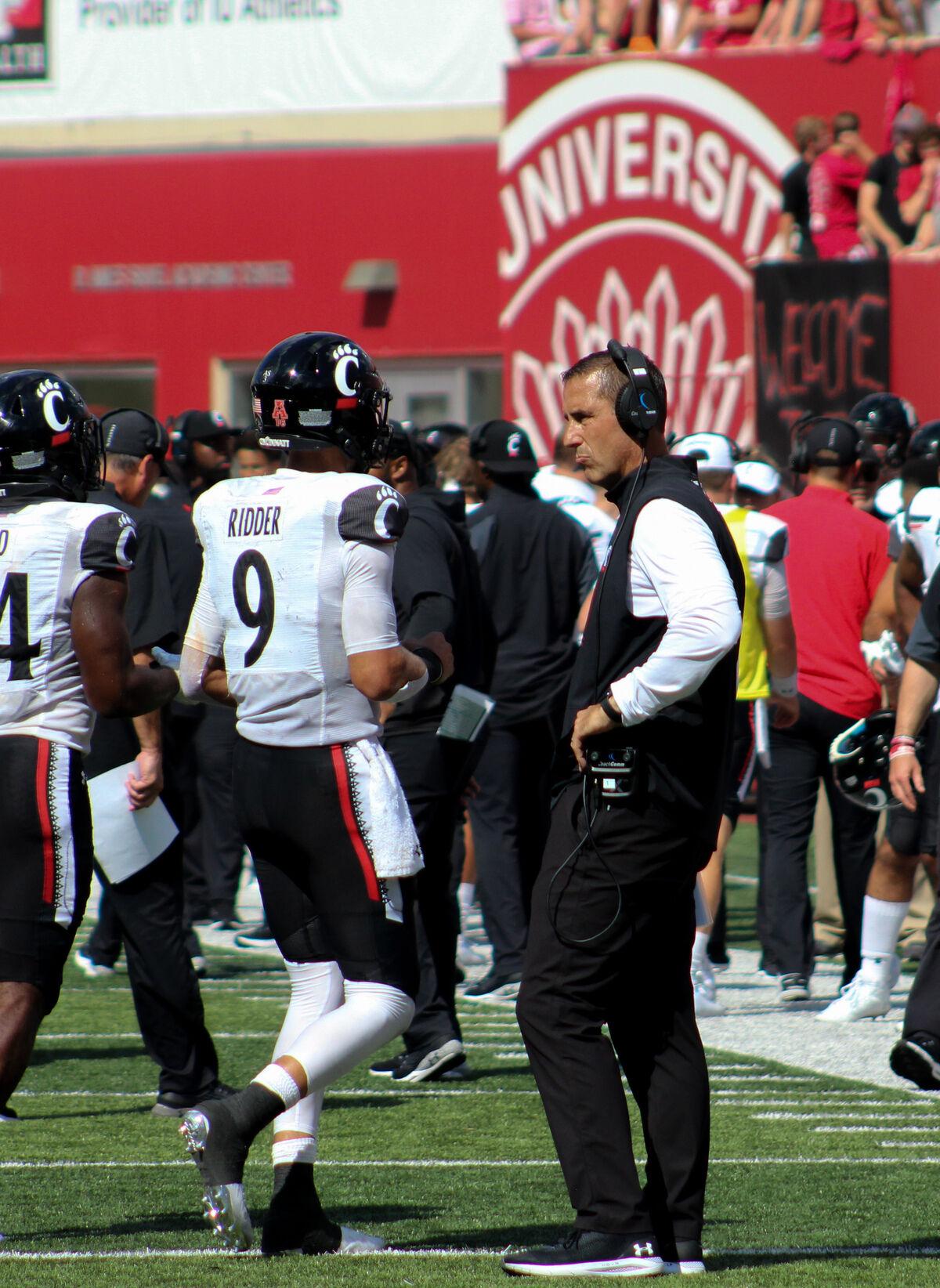 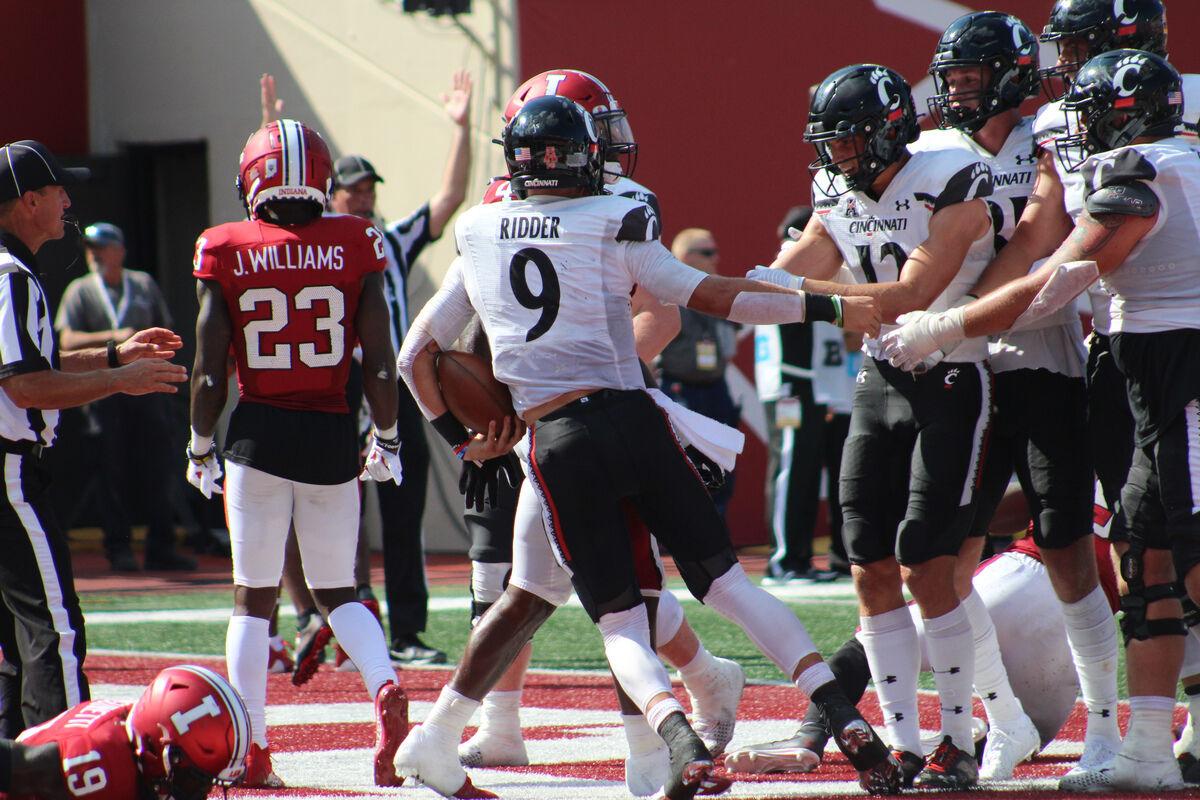 University of Cincinnati football quarterback Desmond Ridder celebrates with teammates after a touchdown at the Cincinnati vs. Indiana game on Sept. 18, 2021.

The University of Cincinnati (UC) football team has aspirations as big as any in the NCAA, with the end goal being to find a spot in the College Football Playoff's (CFP) top two bowl games: the Cotton Bowl or the Orange Bowl. Winning either of those games will put the victors in the National Championship, something that is unprecedented in UC's history and is the ultimate goal of any college football program.

If Cincinnati's aspirations come true, they will be the first non-power five school to make the CFP.

Looking into some of the biggest threats to Cincinnati's chances of making the CFP, some teams will not be included in this list, as they're just a step above the rest: Alabama Crimson Tide and the Georgia Bulldogs. The SEC schools have both offenses and defenses better than anyone this season and are fortunate enough not to be facing off in the regular season this year.

Teams such as the Clemson Tigers or the Ohio State Buckeyes won't be included either because they both have suffered a loss already this season, though they still pose a chance to make noise in the Associated Press Top 25. Notre Dame will also not be included as the Bearcats take the field against them in two weeks.

Check out the teams posing the biggest threat to keeping the Bearcats out of the top four.

The Oregon Ducks already have one of the best wins in the country, a triumph on the road over Ohio State. With the hardest game on their schedule out of the way, the Ducks will be taking on Pac-12 teams. The Pac-12 is labeled a "Power Five" conference, putting Oregon ahead of the American Athletic Conference's (AAC) before the season started. The toughest game left on the regular-season schedule for the Ducks is at UCLA, which is currently ranked No. 24.

If the Ducks win out, it will be hard to keep them out of the CFP. However, if a loss comes their way, especially to anyone not UCLA, expect them to drop down the rankings rather quickly.

Being in the Big-12 has its benefits, and for the Oklahoma Sooners, those benefits are facing big football names and taking them down. Outside of Oklahoma, two other Big 12 schools are ranked in the Top 25 in Iowa State and Kansas State. The Sooners will face off against both in the regular season.

Even though the Sooners have two Top 25 matchups to look forward to, their biggest game on the calendar is circled as one of the country's biggest rivalries: Oklahoma vs. Texas. Last season's matchup was a 53-45 win for Oklahoma, which tilted the series to 15-7 in Oklahoma's favor since 2000.

A loss to either three of those schools will set Oklahoma back, but will not knock them out of contention completely.

No. 5 Iowa Hawkeyes and No. 6 Penn State Nittany Lions

There is typically a sense of reluctance to be truly worrisome of any Big Ten team other than Ohio State. But, the Iowa Hawkeyes have the regular-season schedule to keep themselves at the top. The Hawkeyes avoid both Ohio State and Michigan in the regular season and instead take on Wisconsin and Penn State as their two Big Ten matchups to watch. Iowa's best chance to make the CFP is to win the Big Ten conference tournament, something the Hawkeyes have never done.

On the other side of the Big Ten, the Penn State Nittany Lions have four Top 25 matchups remaining on their schedule. With Penn State traveling to Iowa, Ohio State and Michigan State, it would be nearly impossible to keep the Nittany Lions out of the top four assuming they have a successful conference tournament.

This year, Penn State will have to rely on more than their infamous home crowd to win their most important games.

The Texas A&M Aggies, similar to Penn State, have four Top 25 matchups remaining on their regular-season schedule. Arkansas, Auburn and Mississippi will be telling matchups for the Aggies, but the true test comes Oct. 9 when they host No. 1 Alabama. Texas A&M hasn't beat Alabama since 2012.

Texas A&M has a gruesome schedule ahead, which could work in their favor, meaning that a loss to one of these four teams won't be the end of their season.

This is the opposite for the Bearcats, where a loss could mean their hopes of a bowl game are out of contention. The AAC doesn't have the national stature of these other power-five conferences that the top ten teams are a part of.

Even if the Bearcats remain undefeated throughout the season, conference games will have to be convincing and harmless victories to show the CFP committee what exactly the Red and Black are ready for.