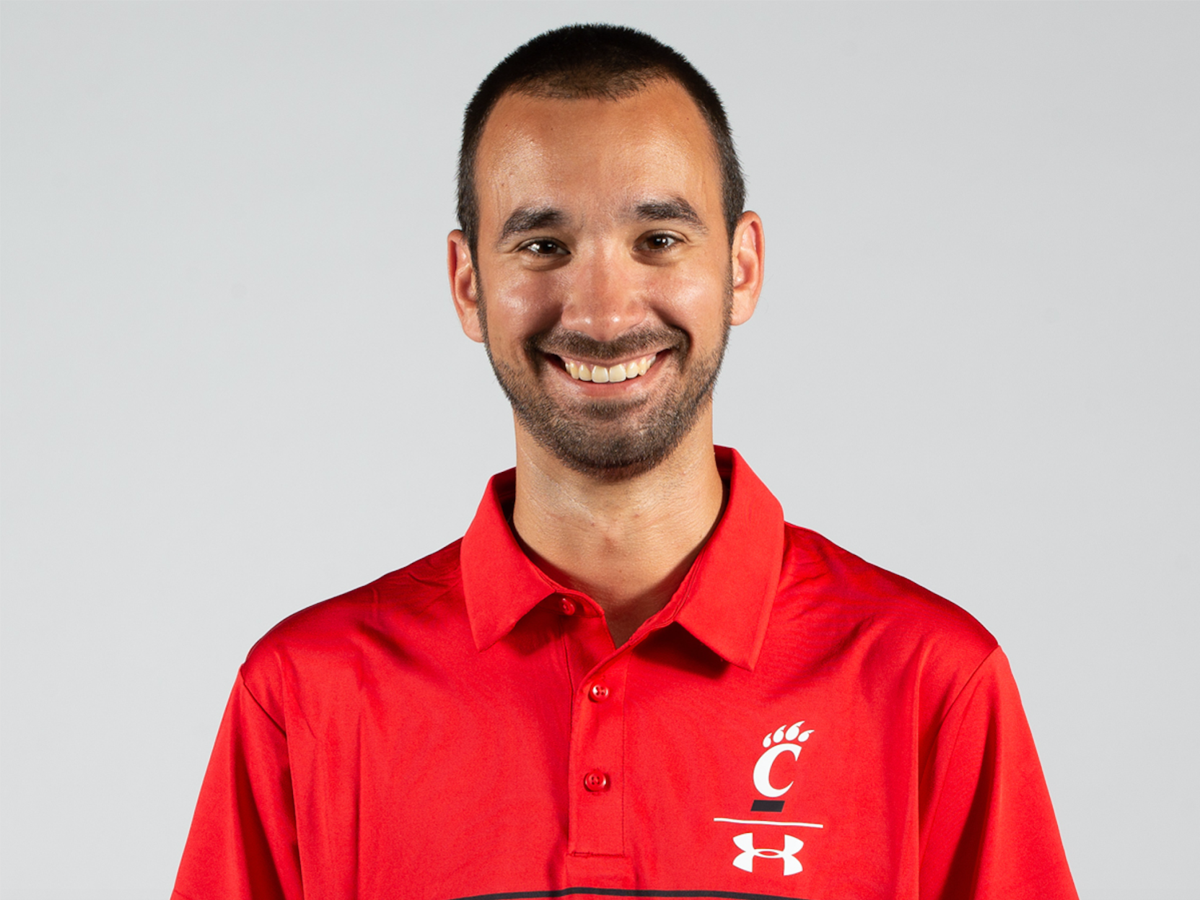 Adam Niemeyer is the Bearcats' director of football video, charged with the critical duty of organizing filmed footage of all sorts for the university's coaches and players. 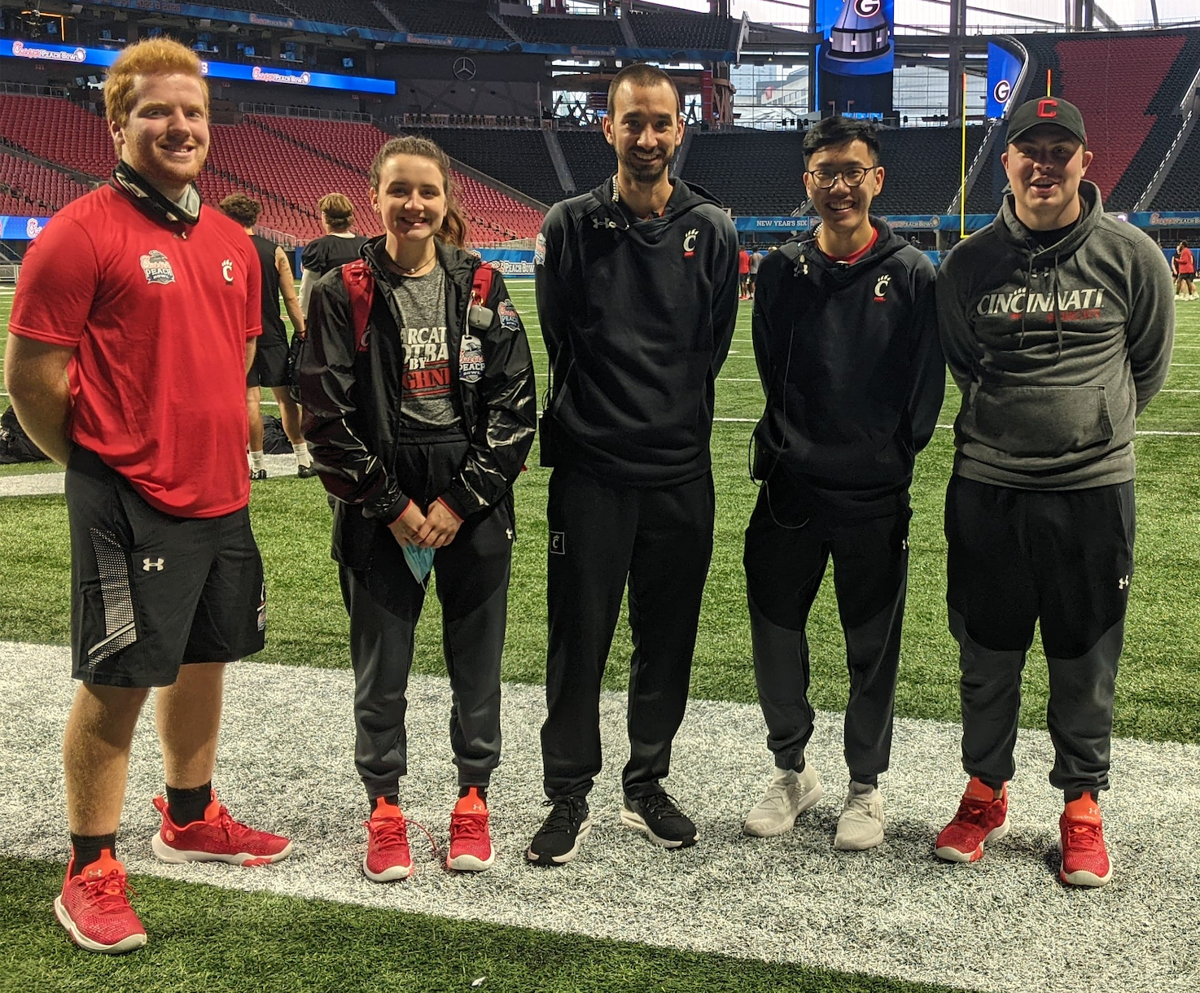 Despite his immediate tasks lying with the team, Adam Niemeyer also relies on and prioritizes the students that he works with.

From the outside looking in, one of the most unsung roles within any university or professional football program is the coordinator of game, scout and practice film. Enter the University of Cincinnati's Adam Niemeyer.

Niemeyer is the Bearcats' director of football video, charged with the critical duty of organizing filmed footage of all sorts for the university's coaches and players. Whether it be last weekend's game film, film from their opponents' most recent game, or even footage from practice to better address each player's weak points.

A lifelong Cincinnatian, Niemeyer grew up on the West Side and has been assisting the football program with film since 2007 – his freshman year at the university. He went on to graduate with a bachelor's degree in journalism and a graduate in communication.

Niemeyer spent all of this time at UC as a student video assistant, then as a graduate assistant before joining the staff full-time in 2012 as the assistant director of football video.

Having been with the Bearcats football program for over a decade, Niemeyer has borne witness to all of the program's highs and lows. Since the hiring of head coach Luke Fickell in 2017, however, the increase in reputation for UC football isn't all that's changed.

"My job changed completely, actually," Niemeyer said. "When coach Fickell arrived, he completely reorganized the way we do things. I was always in charge of coaches film, shooting practices, shooting games and hiring a staff of students to help do that – the stuff you don't see."

"But I used to have a hand in some of the pregame highlight tapes [too]," he continued. "Some of the Twitter stuff, some of the Facebook stuff. We always had a hand in that stuff with [Tommy Tuberville] and [Butch Jones]. So [Fickell] hired Kelsey Sharkey, she took all that stuff off my plate, and I was able to strictly focus on coaches film. Which was completely different for me, but it was also really good."

Since Niemeyer was able to completely direct his attention to the coaching staff's needs, he was recognized with the Collegiate Sports Video Association's American Athletic Conference Football Video Coordinator of the Year Award in 2017 and 2019.

Although, as Niemeyer puts it, the daily and weekly tasks assigned to him may sound meticulous and boring to the average fan that steps into Nippert Stadium; the change by Fickell has allowed Niemeyer to delve more deeply into his position and discover new things.

Niemeyer's increased involvement in-house has played an assisting role in the football program's success of recent years – namely in terms of helping to game-plan and assessing weaknesses in prior weeks through video evidence.

Nonetheless, Niemeyer remains humble – a trait that he claims is a necessity as a video coordinator. Ego has no place in the locker room nor the editing room, he says.

"We all understand our role and we understand our job," he said. "There's got to be somebody behind the scenes, and that's us. If you don't understand that, then it's not a job for you."

As one would imagine, filming and editing all of the footage from so many content variations to make it easy for coaches and players to access and view is a time-consuming task. Over the years, Niemeyer has developed several organization systems with each consequential brigade of staff that makes life easier for them, himself and his understudying students.

From what order of importance things must be edited and available, to how the footage itself is shot, Niemeyer has his hands full year-round. Even coach Fickell has to remind him to take a load off sometimes.

"This past week, I was in the office late, and [Fickell] was like 'why are you here?'," Niemeyer said. "I had to clean up some laptops after the Peach Bowl and put them all back in everybody's office, so everything was settled, and he was like 'you need to go home'."

Despite his immediate tasks lying with the team, Niemeyer also relies on and prioritizes the students that he works with. Making sure they understand the importance of their duties and giving them professional experience that you can't find anywhere outside of a Division I NCAA football program.

A stellar example of the opportunity Niemeyer provides is giving students the chance to sit back and watch team film meetings for themselves and view how the team goes through and analyze what they and Niemeyer have put together.

Several of his prior students have gone on to continue work in the industry or industries closely related to video coordinating – including one former student that works with the software company Niemeyer uses daily and another working with the Los Angeles Rams of the NFL.

Amid the pandemic that raged on through the 2020 season and isn't slowing down so far into the new year, Niemeyer and his team had to make it work with a shortage of students on top of an incredibly extensive precautionary agenda.

"Logistical nightmares," said Niemeyer. "We didn't know quite how it was going to work. We all thought hey, maybe by the end of April, we'll be back in the office, and things will be back to somewhat normal. Obviously, that wasn't true."

Regardless of the understaffing and regular testing, among other things, Niemeyer feels assured that he and his students met the expectations they set upon themselves for the entirety of the season – a feat that should not go unnoticed.

Niemeyer and Bearcats football have a relationship that won't be going anywhere anytime soon, and the director will soon be welcoming new defensive coordinator Mike Tressel into the film room.

Niemeyer and his wife are also expecting their first child, Vivienne, in May. It appears Niemeyer will have his hands full throughout 2021, as well.

Logan Lusk is a communications major with certificates in journalism and creative writing. He has been with The News Record since 2019 and is currently the sports editor. Lusk is also a co-host on a film and media podcast, "AVHD Podcast".