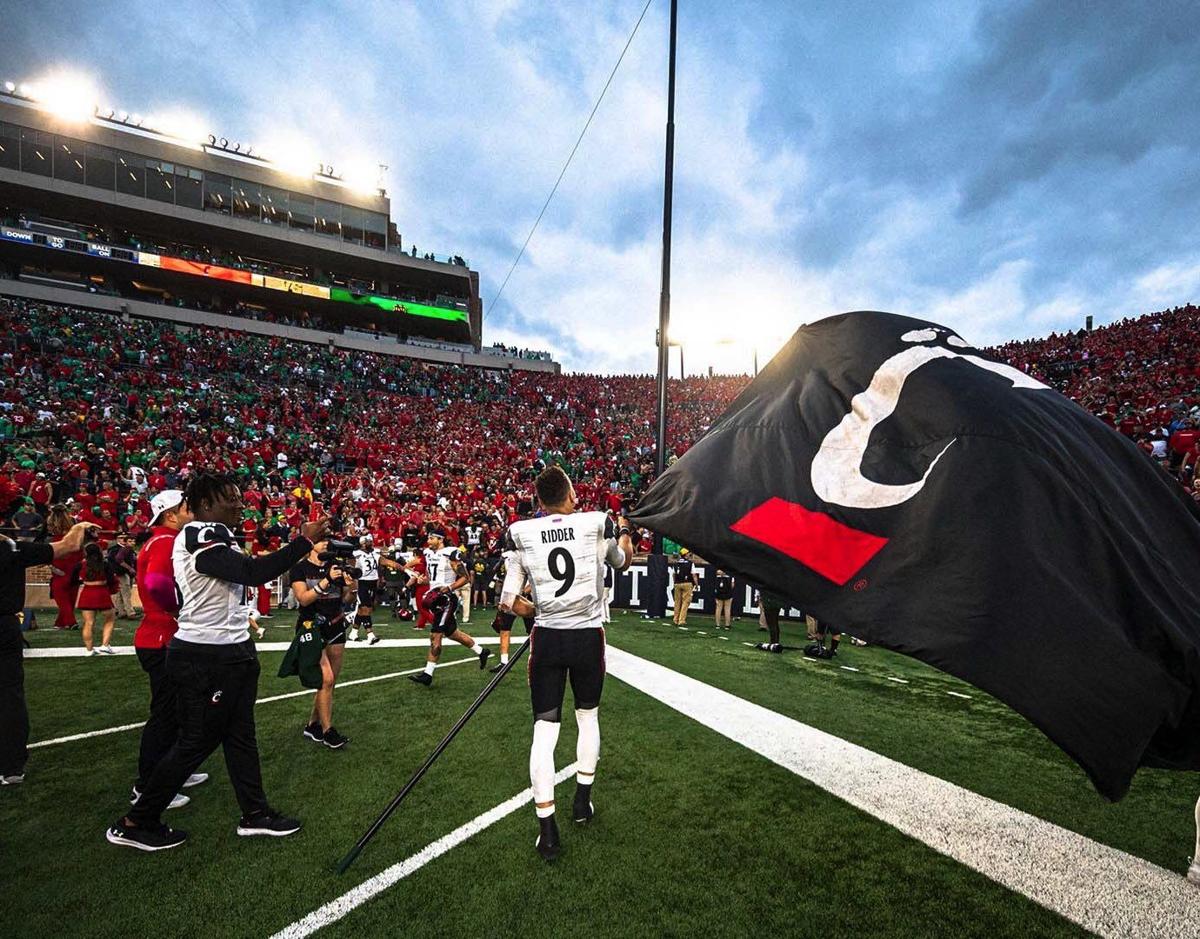 The Cincinnati Bearcats rose two spots in the latest AP poll to No. 5 in the country following their 24-13 win over Notre Dame. 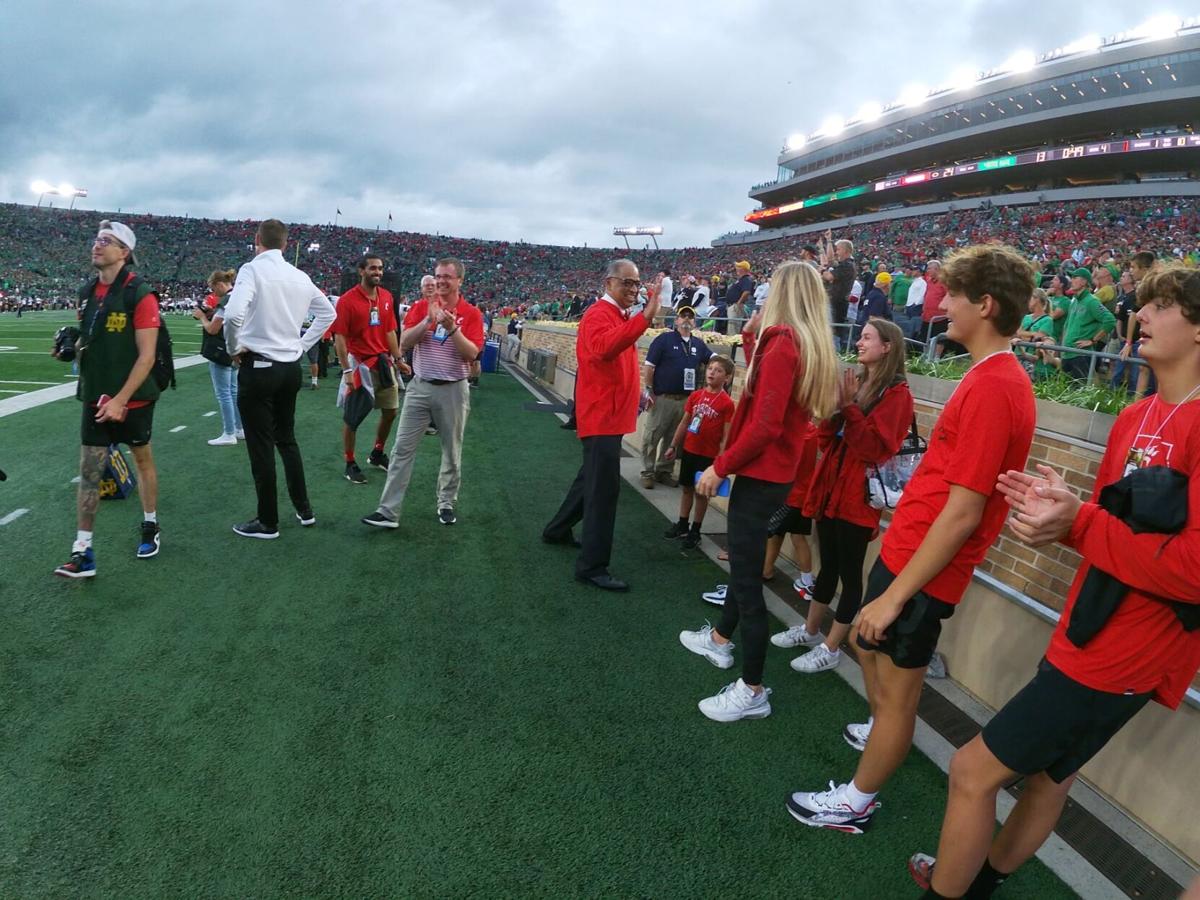 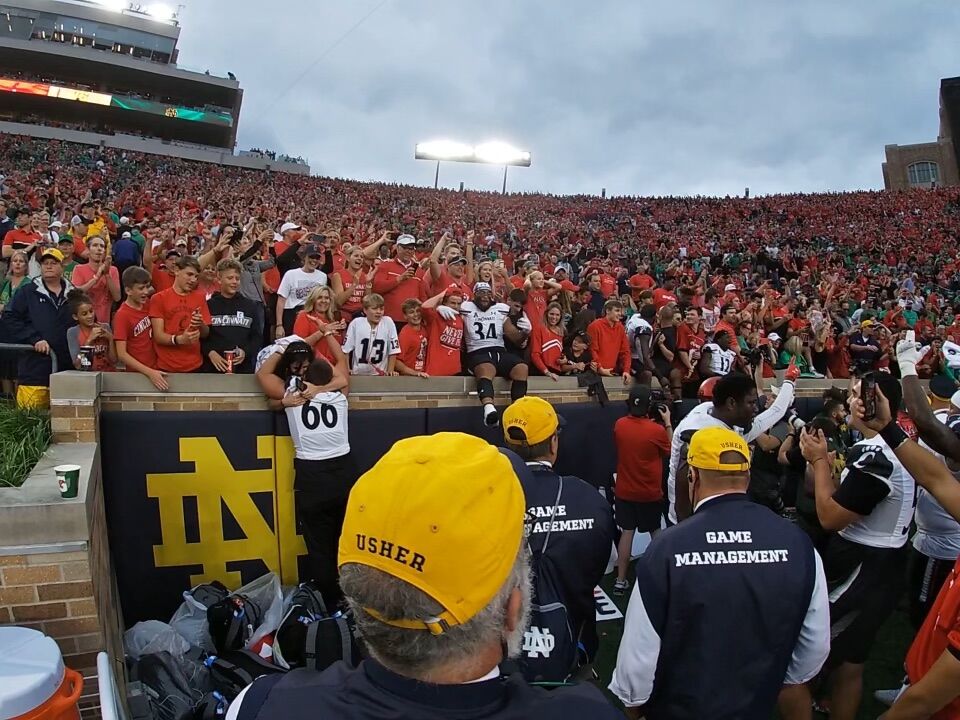 The University of Cincinnati football team celebrates their win against Notre Dame on Saturday, Oct. 2, 2021.

The Cincinnati Bearcats rose two spots in the latest AP poll to No. 5 in the country following their 24-13 win over Notre Dame.

As the Bearcats begin their eight-game American Athletic Conference (AAC) play on Friday, Oct. 8, TNR looks at an updated analysis of the threats facing Cincinnati as the first non-power five school to make the College Football Playoffs.

No. 1 and No. 2 SEC placement withstands

The current No. 1 and No. 2 spots are securely held by the University of Alabama and the University of Georgia, respectively, and are unlikely to change. These two programs pose a minimal threat to Cincinnati because it is likely they’ll both go undefeated until they face each other in the SEC championship game. Even then, the winner will stay at No. 1 and the loser will most likely remain in the Top 4.

Cincinnati’s biggest threat lies within the Big 10 conference, whose conference champion will likely be the one fighting for a spot against the Bearcats. Currently, the Big 10’s Iowa Hawkeyes and Penn State occupy the No. 3 and No. 4 spots, respectively.

However, their conference is full of talent—including No. 7 Ohio State (OSU) and No. 9 Michigan—who are all bound to take a loss before the conference championship. The next game for the Iowa Hawkeyes is against Penn State on Oct. 9, which could result in the Bearcats jumping the loser, assuming Cincinnati claims victory over Temple University. Penn State then must face OSU, Michigan, and No. 11 Michigan State, making their road to remain in the Top 4 a challenging one.

The Oklahoma Sooners will likely coast to the Big 12 championship undefeated, making them a top threat to Cincinnati’s playoffs aspirations. Led by Heisman hopeful quarterback Spencer Rattler, the Sooners’ toughest game will come on Nov. 27 against No. 12 Oklahoma State. An undefeated Big 12 champion has typically gained more committee votes over an undefeated non-power five program, meaning the Sooners might be of concern to Cincinnati.

The No. 16 Kentucky Wildcats are 5-0 and have a rigorous SEC schedule ahead. If they win out, however, they’ll be sure to climb the rankings into contention. If the Wildcats upset No. 2 Georgia on Oct. 16, they could find themselves anywhere in the Top 25.

No. 10 Brigham Young University (BYU) has a relatively easy schedule ahead of them that entails no currently-ranked opponents. BYU will also not participate in a conference championship because they are an IA Independent University, meaning they are not tied to any conference.

The AAC’s Southern Methodist University (SMU) entered the latest rankings as No. 24, further solidifying their spot in the AAC championship game against Cincinnati. Their undefeated season thus far helps strengthen the Bearcats’ schedule, which is typically a reason for their lack of respect. The Bearcats face SMU on Nov. 20, just one game before the AAC championship.

The Oregon Ducks, previously No. 3, were upset by unranked Stanford dropping them to No. 8. This upset is helpful to Cincinnati because Oregon will likely go on to be the Pac-12 champion, meaning come playoff time, one of the power-five representatives will have a loss.

The first College Football Playoff rankings will be released on Nov. 2.