Fences have been set up around Wilson Memorial Hall as crews work to prepare the building for demolition, which is schedueled October. 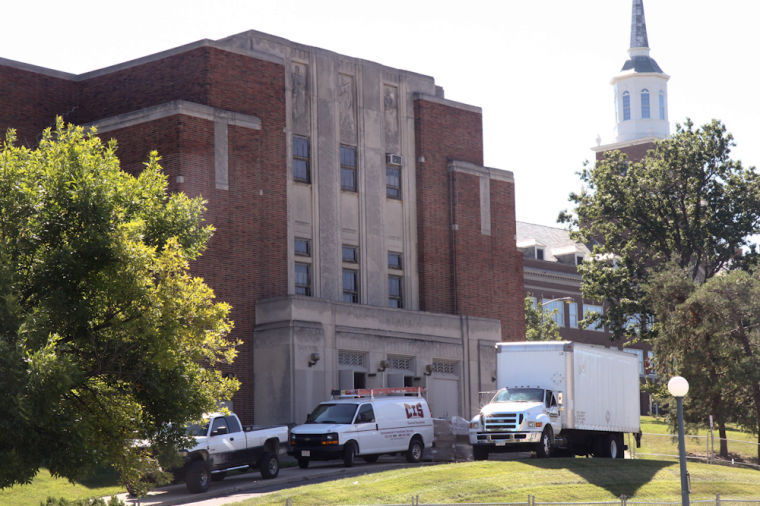 Fences have been set up around Wilson Memorial Hall.

Fences have been set up around Wilson Memorial Hall as crews work to prepare the building for demolition, which is schedueled October.

Fences have been set up around Wilson Memorial Hall.

In its prime, Wilson Auditorium played host to University of Cincinnati plays, music performances and lectures. Now the 81-year-old building is set to be torn down.

UC’s Board of Trustees approved the demolition, which is part of the $45 million, large-scale renovations to the Teachers College complex, at its Aug. 27 meeting.

The 40,000 square-foot site, north of McMicken Hall off Clifton Avenue will be torn down to make space for temporary mobile units for students who have classes in Dyer Hall and a portion of Teachers College.

The auditorium has been mostly vacant since the early 1980s. Its non-use was mostly due to its location on campus, which is not accessible enough to serve its original auditorium-like capacity.

The renovations needed to bring Wilson up to code are not worth the expense, said Beth McGrew, associate vice president of planning, design and construction.

Along with blatant problems, including lead paint and asbestos that would need to be removed, the emergency exit from the stage is not up to code and the building doesn’t meet the state’s egress requirements.

The structures in the bathroom would also need a complete overhaul.

Although the problems facing the building’s continued existence are numerous, the decision to tear it down was not hastily made.

“This has been in the works for years,” McGrew said.

In the end, none of the possibilities were viable and the university concluded the building would have to be destroyed.

“Each scenario was complicated and after all the studies were done it was clear it wasn’t worth it,” McGrew said. “It didn’t work out to be anything of use for the university.”

Demolition was originally approved in 2006, but it was pushed back and the building continued to go unused, McGrew said. The board of trustee’s approval of Phase Three of the Teachers College renovations sealed Wilson’s fate.

Fencing was put up around the building Wednesday and demolition is scheduled for October, McGrew said.

After the first of the year, the site will be cleared and made ready for mobile units that are being brought in sometime in April to house students displaced by the Teachers College renovations. The temporary complex is scheduled to come online in July — the same time the Teachers renovations are set to start.

The fencing around Wilson led second-year chemistry student Blake Ridenour to start researching the auditorium and tweet at President Ono inquiring about the future of Wilson.

“I’ve always been very interested in the history of anything I’ve been a part of,” Ridenour said.

In response to Ridenour’s tweet, Ono confirmed the building is going to be torn down, but the university was going to save the historic facades.

Ridenour told Ono via Twitter that he was happy to hear UC is taking pride in its history.

McGrew confirmed that UC will try to save the facades, which feature historical figures.

Once the renovations to Teachers are completed, the mobile units will be removed and the area will be converted into a green space. The site will be available for future possible construction projects, but as of now there are no set plans to build anything on the site, McGrew said.

It was originally constructed in remembrance of Obed J. Wilson, a local self-made businessman who supported the arts, according to an entry in the 1932 Cincinnatian. At the time, the building featured modern amenities including a projection room for “motion-and-sound pictures” with the capability of relaying radio broadcasts.

Throughout the years Wilson hosted performances by UC students and lectures from visiting speakers.

Although its destruction is necessary, McGrew said, losing buildings with so much history is unfortunate.

“It is always sad to lose an old building like Wilson,” she said.